The Veterans Multi-Purpose Center (VMPC), is unique. It was started by Veterans in 1989 out of a single desire to help and benefit all Veterans and their families in Florida. Thank you for visiting.

Since the granting of its IRS 501(c)(3) Tax Exempt status in 1992, the Center has been involved in a broad base of Veteran services. The Center works closely with the VA and other government agencies as well as the public and private sectors to provide quality services and benefits to Veterans throughout Florida.

The science of the human-animal bond is proving very effective in a new arena: on the home front of a new war. Returning veterans are finding help, as well as healing in therapy that involves a saddle and a set of reins. 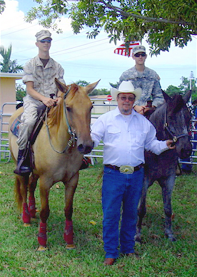 “It feels pretty good. I feel tall,” said U.S. Marine Gene Calonge, who recently returned from his deployment. Learning to ride again is strengthening the bodies and minds of young vets here at the Veterans Multi-Purpose Center in Davie, Fla.

The last time Calonge mounted a horse, was his service with the Marine Corps. This time around it’s Sam, a 4-year-old Arabian, giving him a much-needed boost.

“It’s different bonding with an animal, you feel like you’re not going to be judged so much about anything so … you and him just have a good time,” said Calonge.

A horse so heroic during the Korean war she was promoted to Staff Sergeant by the Commandant of the US Marine Corps, and is listed alongside George Washington, Thomas Jefferson, Martin Luther King, Mother Teresa and John Wayne as one of our all-time heroes.