by Susan Pines, The New Groveland Graphic
The healing power of horses is no secret. That soldiers frequently return from deployment with wounds to heal (both physical and emotional) is also no secret. What is far less known is that for the past year and half, there has been a facility operating in Groveland which uses equine therapy specifically to help heal veterans. It is a quiet place, away from the hustle and bustle of the road way. The small arena and barn is surrounded by open land and trees. The arena could be used for practicing for competition classes in a show ring, but it is instead being used for the veterans, and the seven therapy horses. A black and white gelding named Trinity (a trick horse) is one of the seven. At first glance, he appears to be high strung and in need of training. But looks can be deceiving. 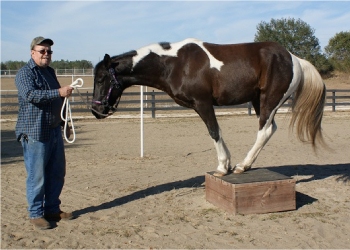 The equine therapy facility is run by Robert Bambury, with the help of his wife Marge, his grandson, his grandson’s wife, and their workers. The equine therapy program relocated to the Circle B Ranch in Groveland from the Ft. Lauderdale area. It had been in operation there since 1992, typically assisting 350 veterans a year. The program itself is called Equine Assisted Psychotherapy for Veterans at Veterans Multi-Purpose Center.

As Bambury says, the veterans need to re-adjust their lives back to being in a marriage, to being part of a family. Even being intimate with their wives and being loving towards their children are things that have to be re-learned. Working with the horses and bonding with them lets the veterans realize that the horse is in the same situation.

The horses are herd animals, and natural prey in the wild.

Continuing his explanation, Bambury explains that the men and women who were on the front lines were in a defense mode or survival mode – the same as the horse.

Giving examples, Bambury says that Vietnam vets would worry who is behind that tree, where as the Vets from Iraq would strain trying to see what is out there if they were in an open field. So with the help of Trinity and the obstacle course, horse and veteran can bond, and teach each other to have confidence to face something that is new.

Exposure therapy is what Bambury uses to help the vets get back to dealing with the daily activities of everyday living. It is ground work that helps them – not just horse-back riding.

As Bambury says, “A lot of men and women go into the military with a lot of baggage to start with, and end up adding to that existing baggage when they leave.”

“This is their place and their oasis – not about me or mine. This is for them and their families as well.”

With that thought, Bambury takes Trinity into the arena and lets the tricks begin. He shows how loving and funny the horse is, and gives you some idea how simple tricks with the horse can help translate to new lives for the vets.

For more information the center, visit their Web site at www.vetsmpc.org. or call 954-791-8603 or 877-791-8603 and schedule a visit. To help buy feed or hay for the seven horses there visit Noland’s Feed and Supply in Mascotte and pay for feed and hay directly.

A soldier’s fatal burden
When we think of soldiers, we think of the things they carry on the outside. The rifle. The bayonet. The camouflage pattern of a uniform. A helmet. Boots. Perhaps a canteen or a poncho or a hand grenade. And when we think about these things we might see them, but we don’t actually think about them, about their uses and their true meaning and how they make a soldier so very different from us that we can never really understand him or her.

What we don’t think about are the things a soldier carries on the inside. The things that make him or her exactly the same as us. Take away the rifle and bayonet, strip off that uniform, whether starched and pressed or tattered and bloody, and the soldier is merely a man or a woman. Noble in reason, as Hamlet knew deep in his melancholia, infinite in faculties, admirable in form and movement, but like Hamlet and like you and I, prey to the anxieties and slights and failings of our common humanity.

The hard and melancholy things a soldier carries inside are the same as those we carry, but more so. They love each other as we do, they know fear, as we do, the cry sometimes and exult at others. They know boredom and frustration and resentment and rage. But sometimes, because of the extremes at which they must live and die and—lets not forget—kill, they know those things more intensely than we can ever imagine.

It destroys them. Not all of them, not all the time. But the strange, unnatural intensities of a soldier’s life and the proximity to violent death in which it is lived during war time destroys many, many more of them than the commonplace demands of life do us.

Perhaps that’s why, in the US, which has been at war for over 10 years now, a serving member of the military takes their own life every 36 hours. Perhaps it is significant that of those suicides, the heaviest numbers are to be found among infantrymen—the soldiers on whom the most grievous and intense demands are laid.

And while it is disturbing, shocking even, that every day and a half a soldier should decide to kill himself or herself, it is worse when they finally lay down their arms and take off that uniform. According to preliminary research by the US Department of Veterans Affairs, among those returning from America’s wars the suicide rate climbs steeply to a point where one former soldier dies by his own hand every 80 minutes.

Look up from your breakfast, or that first coffee of the workday, to the nearest clock. When you are thinking about lunch in a couple of hours a former soldier will be thinking about putting a gun in his mouth, or noose around her neck, or perhaps just stepping on the accelerator and steering a car into a tree. Depending on when you decide to grab that sandwich, two, maybe three others will have already died in a similar fashion.

A dusty barn and the musty smell of manure. Birds chatter among the rafters and…